The Elements of the Universe 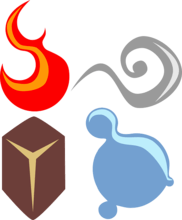 You have likely heard the words "Elements" or "Tattwas" thrown around in esoteric circles. However, what are they exactly?

Quick Navigation
The Foundations of the Four Elements
The Elements, Your Psyche (Mind) and Your Nature
The law of analogy and how the physical world can affect your mental world, described in terms of elements
Astrology, Temporal Elements and the Fundamental elements
Your body's function as a combination of the fundamental elements
Diet, Ayurveda and Chinese (Taoist) medicine
Hexing, Blessing and the Elements
The Pentagram and “God”

The Foundations of the Four Elements

With careful contemplation, one comes to the insight that every "happening", occurs within space — the actual "material"  space, but more importantly the space of consciousness in which the material space is also contained, in our experience.

Experience, and existence itself is consciousness and it's contents. In the Tantric lore, this is referred to as Shiva (consciousness) and Shakti (energy and ripples of energy or dance of the "goddess") within consciousness (or space, which can be gleaned to be the material analog for consciousness itself, if one contemplates deep enough). In the various Indian art forms of Bharatanatyam, Kathakali and such, the dance of the contents of the consciousness is expressed through metaphors and myths. Indeed, most older forms of art could be said to have had esoteric significance.

The contents of consciousness (Shakti, the mother goddess/Gaia) , or the "clockwork" of the universe — whether it be objective or subjective — can be said to perform expansion, contraction, mediation between expansion and contraction and "materialization". These are the elements that make up the clockwork and indeed, it is the fundamental nature of the universe. Every other "happening" or performance can be said to be the permutations and dances of these basic elements — whether it be objective phenomena or subjective thoughts and feelings.

On Earth, or the world that we experience where our consciousness is "tuned into", the expansion can be said to be encapsulated best by "fire". The contraction is encapsulated by "water", the mediation between contraction and expansion happens in "air" and the solidification of all these into physical experience is the "earth". To summarize the function of the elements:

The fifth element, Akasha or "space" is the element out of which all other elements emerge out of. It is consciousness itself! (Everything material exists in space, whereas everything you experience exists inside consciousness)

When in occult circles you hear talks about "traversing the space of Akasha", it is simply the traversing of the "space of consciousness". The world that you are experiencing now can be said to be one among many "windows" or "channels" within the vast, infinite "space" of consciousness or Akasha.

Indeed, Jung's exploration and insights from traversing this space is quite insightful, as can be found in his works like Synchronicity, Man and his symbols, the Aeon etc. Modern psychology however, seems to have restricted this exploration to reliving memories in the subconscious (which seems to be connected to the collective unconscious, which in itself seems to be connected to the Akasha space) for "therapeutic" purposes, instead of also using it as a means for exploring the nature of the mind and therefore the universe itself, which can be said to be made up of "mind stuff".

The Elements, Your Psyche (Mind) and Your Nature

All of these, happens in the "space" of your consciousness or Akasha itself.

Your psychic structure itself hence, is made up fundamentally of the same elements — fire, water, air and earth.

The law of analogy and how the physical world can affect your mental world, described in terms of elements

The separation between the "objective" and "subjective" can be gleaned to be largely illusory upon careful contemplation and meditation practice. What you think about the "self" is also a happening in consciousness. "Selfing" is a more accurate description, and it is also happening within the space of consciousness, just like every other happening.

In reality, there is only consciousness and its contents. This is not even a grandiose occult claim, but something that is self evident, and an axiom — one need only carefully contemplate.

In fractal cosmology, the universe can be said to be fractal in nature across really large scales. Therefore, when there is "fire" or expansiveness in the objective to where the subject is tuned into, it could be said that there is also "expansiveness" in the subjective. The nature of the contents in the subjective (microcosm) can be said to be fractally aligned with anything that happens largely in the objective (macrocosm).

Just as there are chemical elements of material that exists in physical space that make up physical configurations of matter in space (hydrogen, helium atoms etc), it can be said there are temporal elements that make up the configuration of the time you are in. Indeed, according to Einstein's theory of relativity, time and space are but one — time-space, so it would be no surprise that the characteristics of how they emanate and express themselves would be similar.

When you are born, there can be said to be a particular permutation of the elements within the Akasha or consciousness. This can be likened to the eternal dance of "Shakti" whereby, if you take the snapshot of each given slice of time, you will be able to catch her in a particular "stance" of her dance, where certain elements are dominant and others are dormant. The snapshot of your astrological profile of the macrocosm captures this, and thereby fractally, the nature of your own psyche at that given time.

Your body's function as a combination of the fundamental elements

Just as your psyche is configured of the combination of elements, it can be gleaned upon careful contemplation, that the state of the body too is configured of the same four elements — expansive aggressive (fire), cooled down or submissive (water), a dissonance between aggression and cool or the intellect that is trying to make a decision between the dissonance (air) or laborious/gluttonous (earth) . Your psyche and emotions have a direct effect on the state of your body and vice versa.

They are not mutually exclusive, and can be said to be the parcel of the same fractal pattern. Therefore upon extrapolation, it is easy to see that whatever happens largely in the macrocosm of the universe, manifests itself in the psyche, and therefore the body's function.

If a fiery masculine stance of the dance of Shakti then, is what perhaps will manifest in various ways in the universe — forest fires that happen largely in the world coupled with a right wing alignment of politics, coupled with aggressive tendencies and a social transformation, for example.

Diet influences the manner in which your body is composed. "You are what you eat", after all. This idea not only affects your body, but also your psyche structure. Indeed, modern science confirms how much gut microbia can affect the state of the mind.

This idea can also be applied inversely, if you take into account the fractal nature of the universe that we experience, as we discussed.

From this tangent of thought, we can extrapolate the mechanism behind how Ayurveda and Chinese (Taoist) medicine functions.

They both rely on prescriptions based on the astrological profile of the person at hand.

Therefore, it can perhaps be said that if one is able to capture the instance of the stance of the dance of "Shakti" or the contents of consciousness or Akasha (in both time and space) macrocosmically when one is born and contrast it with the pattern at the present instance), one is able to capture the nature of the psyche microcosmically, and therefore fractally, the arrangement in the physical body itself — in terms of the elements (as opposed to gene code, which would be the material science’s way of explaining) — in the present.

Ayurvedic and Taoist remedies are then prescribed based on the macrocosmic profile of the fractal pattern of the contents of consciousness/universe/Shakti for the individual, microcosmically for the individual. This is also often accompanied by various Mantras to "balance" the nature of the elements to reach closer to the state of "tattva purification".

"Tattva purification" can be said to be a means by which the psyche, and therefore the body is more aligned to equilibrium, or the void, or the space/Akasha/consciousness.

Keep in mind that the Akasha or consciousness (Shiva) itself is patternless and contains all the patterns and therefore the elements within it.

Along with remedies, one is also restricted from consuming certain types of foods based on the pattern that is deciphered to accelerate this process.

Anything that you consume can be said to have a specific "pattern" of the fractal, which may either aggravate more patterns  or neutralize existing patterns (towards the void or consciousness or space or equilibrium). It can perhaps be likened to the game of tetris, where the objective is to neutralize the patterns toward the state of the empty space!

Hexing, Blessing and the Elements

The idea behind Hexing/curses and blessings can also be seen as related to the equilibrium of elements back into the Akasha (or consciousness).

Hexing/curses, can be essentially seen as the aggravation of patterns of the elements, and therefore the frequency of their vibrations as opposed to their neutralization toward equilibrium.

Blessings then, are the neutralization of the elements back into the Akasha/space/consciousness.

When one contemplates about curses that afflict a certain area or family, it is important to again, consider the fractal nature of the universe — your psyche is fractally (in terms of the elements, but also genetically) aligned with the pattern in a way that your area/family functions as a membrane of the larger macrocosm pattern and "you" as an extension of that membrane. Same can be said for blessings!

It is easy to see how this is directly correlated to the pattern or dance of Shakti of the macrocosm at large and how various divination tools like astrology and geomancy can be applied here, to understand the permutation of the elements.

With this knowledge at hand, various neutralization and enhancing techniques can be applied for curses and blessings — by the use of Mantras, Ayurvedic remedies or alignment of one's psyche with a particular deity that embodies an aspect of macrocosmic pattern to either aggravate the pattern of “Shakti” more into a maddening dance or toward are more graceful, or ultimately even toward her going toward the complete relaxation or Shavasana!

The Pentagram and “God”

"God" cannot be defined or explained because it cannot be contained within thoughts and the mechanism of the mind. It is essentially the void, or the as the buddha called it, "Shunyata".

It is important to remember that when contemplating about the idea about the void, one must not mistake it with "blackness" or "emptiness", for they too are ideas contained within the mind.

If "God" is said to be omniscient, omnipotent, omnipresent omniscient, omnibenevolent, all of these ideas itself must contain within it, including the idea of "it" -- If one contemplates carefully, these (and everything else) are but ideas in consciousness.

The pentagram encapsulates this idea in terms of elements perfectly, and also in terms of the ideas discussed earlier — consciousness void is at the center, and the 5 elements at various points of the pentagram. The two types of pentagrams differ only in the pointing of the Akasha principle. The upward pointing pentagram can be signified as a "going outward" to space whereas the downward pointing pentagram can be signified as "withdrawing inward" to inward space.

Physically, the universe itself is in a quest for equilibrium, towards the void where there is not even a ripple of it's contents. By law of analogy, this is perhaps the quest in our subjective experience also, where the elements merge in back into the Akasha.