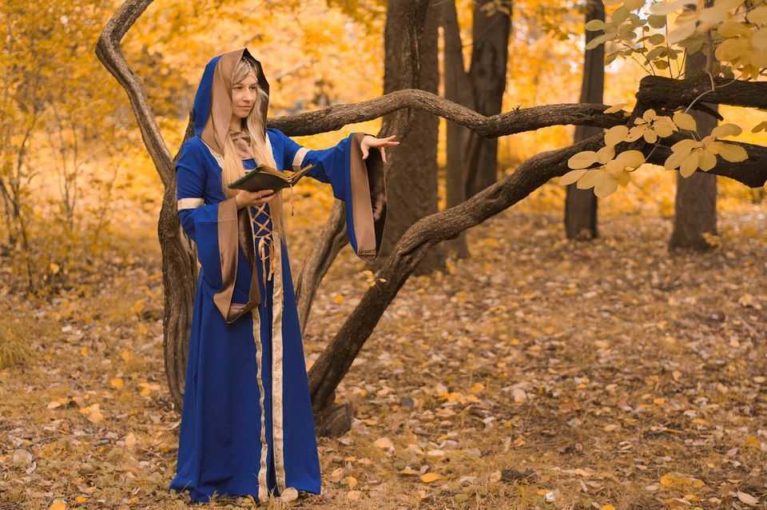 Ritual Robes are garments adorned for the purpose of performing various kinds of magickal works. This includes during traditional solo ceremonial rituals, group rituals of an order or a coven, dream working, and also during access of other types of altered states of consciousness for various magickal and divination work.

It usually consists of a robe, a headgear usually in the form of a hood, and occasionally an appropriate belt to hold the robe together. They usually come in different colors and are embroidered with various glyphs, sigils and inscriptions as per the choice of the occultist.

In this article, we shall discuss the significance of ritual robes, how to “enchant” them and what type/color robe to wear for different purposes.

Quick Navigation
Significance of a ritual robe
Ritual robe, headgear and belt
Choosing the right ritual robe for the occasion
Rationale
Picking the color of the ritual robe
Energizing the Ritual Robe
Important considerations
In closing

In our everyday lives, we all wear “masks”. These include the “masks” of different personalities and roles that we play, and those of more physical nature like the clothes we wear, the hairdo, and other cosmetics to augment those personality roles.

The personalities that we adopt are of course, necessary to play the game of life. However, in  magick and witchcraft, these mundane personalities become a hindrance. It is precisely for this reason that in the shamanistic traditions, the candidate shaman is sent off to the forests to fend for themselves and to face the “self” without the facade of various personalities.

In order for a ritual to work most effectively, one has to essentially *drop* their regular personalities and become one with the forces that they wish to draw. This is true for any kind of magick work, including during the evocation and invocation of deities and spirits to help you with tasks, divination/psychic work and whilst traversing the hyperspaces of altered states of consciousness.

Ritual robes, when properly “charged” or associated with the psyche to enable the dropping of the mundane personality to a new one, serves as an excellent aid to get oneself to drop the personality.

Why do you think uniforms are often made mandatory in various organisations, including the military? They assist in helping one's ego to identify with the said organization rather than their own identity, boosting the fidelity towards the organization, bolstering productivity.

Now of course, ritual robes become rather unnecessary and redundant for the very advanced mages, but for the rest of us mere mortals, it can be something that makes or breaks a ritual.

A magician/occultist/witch is often portrayed as someone who wears a long, loose ritual robe and a pointed hat or a hood. Each of these have their own unique significance, and in Franz Bardon's work The Practice of Magickal Evocation, he describes the significance of each piece of garment and how it is to be psychically associated in detail. The gist of it is as follows: This symbolizes the magician's psychic connection with the entire macrocosm. That is, it is to be psychically associated with the unity between the microcosm and the macrocosm, the subjective and the objective, the Kundalini with the Crown Chakra, the Shiva with it's Shakti, or the feminine with the masculine. It is also to be associated with the cumulative effects of all the five elements that make up the universe.

Various glyphs, sigils and other inscriptions can be made on the headgear to make this association even more powerful. The sigil or the image of a personal deity can also be inscribed on the headgear, for the personal deity acts as a conduit between the magician's limited personality and that of the infinite. This phenomenon is described in the article on Idol worship, and it is a recommended read. Properly energized and psychically associated, the headgear can significantly boost magickal activities.

The ritual robe itself is the magician's insulation and protection against negative astral forces. It is useful not only during a ritual, but also during activities such as divination, crystal ball gazing for various activities, spirit communication and astral travel using various techniques of altered states of consciousness.

It is however, recommended that a different ritual robe be used for performing ritualistic magick involving things like invocations, because the psychic association works in really subtle ways.

Ideally, ritual robes must be worn on the naked body, but if the climate doesn't permit, it can be worn over other types of clothing such as a simple shirt and pant. But note that the color of the clothing underneath should match the ritual robe. We shall see in the subsequent sections, the significance of the color of the ritual robe and how to pick the right ritual robe for the occasion. Simple black, white and purple color robes should be sufficient for the beginner to psychically associate with all kinds of magick, however.

Being barefoot is the most ideal, but if you are wearing footwear, the color should ideally match that of the ritual robe itself.

The Belt or Girdle The belt or girdle holds ritual robes together. It can be made from leather or from the same material as the robe itself. The color can be anything, but the belt can be ritualistically worn at the end (after the robe and the cap itself) to psychically “seal” the qualities of the headgear and the robe itself. Inscriptions of the control over elements can also be made on the belt, to boost the mental association with its powers.

Next, we shall see how to pick the right ritual robe for the occasion:

Choosing the right ritual robe for the occasion

In the ordinary conscious state, one tends to think in terms of division. For example, instead of looking at one whole event such as “The cat passing by the window”, one can look at it as the event “cat's head's appearance” as the cause of the appearance of the tail of the cat.

The above is an extreme example, but it is essentially how our brain works in our daily lives — we divide and “objectify”, and create a cause and effect relationship for everything. One must understand that such divisions are arbitrary, and concocted by our minds, instead of having an objective reality.

Therefore, the subjective and the objective exists within one another, much like the snake ouroboros, biting its own tail.

This phenomenon is discussed in the articles describing the significance of deity and Idol worship, psychedelic Shamanism and summoning spirits, in different ways.

Realizing this union and living through that perspective — which is also synonymous to the union with the divine — has been the objective of all spiritual practices including yoga (meaning “union”).

In alchemy, the workings with metals, herbs etc. were done not from a scientific, objective breakdown, but from a perspective where the subjective and the objective were considered one and the same. They didn't see the objective processes as “condensation of sulphur”, for example. Instead, they associated them to various visions of psychical origin like the “arrival of the Eagle” and the “burning of the salamander”; sort of like a synesthesia.

A very good, relatively modern example of this is the discovery of the benzene ring by the chemist August Kekulé: “He said that he had discovered the ring shape of the benzene molecule after having a reverie or day-dream of a snake seizing its own tail (this is an ancient symbol known as the ouroboros).”

The keen observer, or someone who is experienced in occultism and working with synchronicity will note that the psyche *selects* the reality and vice versa.

Therefore, whatever gets associated with the psyche will have an effect on the objective reality and magick.

The color of the ritual robe therefore, is one such example.

The physical sciences that originate from alchemy are useful tools to help us arrange material in a more efficient manner to make us more physically comfortable. However, they do not describe objective reality as it is. They are OUR MIND'S way of conceptualizing reality and making sense of it. Any sensible scientist knows that the sciences are “models” of reality.

Similarly, there are other models or “maps” of reality that describe and abstract details of the microcosm and the macrocosm which are useful for psychic navigation and magick.

The Kabbalistic map of the Sephiroth and it's antipole the Qliphoth are examples: The details of this map of reality, the Chakra system, and how it is relevant to various types of spirits is discussed in the article on Summoning spirits.

The key takeaway is that each of the spheres within the maps of the Kaballah have their associated planets, and each planet can be said to have their characteristic qualities, types of spirits and deities. The qualities are as follows:

In alchemical thinking — be it Tantric or Hermetic — the physical planets are the physical manifestations of the qualities that originate from the subjective psyche and vice versa.

Picking the color of ritual robes

Note: For many of you, buying a different color robe for the different planets and their associated characteristics can be unrealistic. Therefore, robes of White (working with positive forces), of Black (negative forces) and Violet or Purple (all forms of magickal activity, like Divination etc.) should suffice. Properly energizing it psychically is key.

The various planets and their associated colors are as follows:

When invoking/evoking spirits or deities, the associated planet of the deity is to be considered. For example Kali controls the effects of the planet Saturn, whilst Ganesh controls Jupiter. Each Angel or Demon also has it's denizen planet. A detailed list can be found in Franz Bardon's work The Practice of Magickal Evocation.

Otherwise, and if the associated planet cannot be found for a particular deity, then the most commonly or closely associated color is to be adorned.

For an account of how colors affect magick and the psyche, do read the article of colors of magick.

In order to energize a ritual robe, the headgear and belt that you may have bought, it is recommended to first hand-wash it gently under running water and visualize any negative, unwanted and even ordinary influences to be washed away. One must psychically associate the astral part of the ritual robe to have become translucent, with only it's property of the color to be remained. Blessings and help from your patron deity for this purpose is recommended.

Ritual robes, when used again and again, will increasingly be psychically associated with its intended purpose. That is, the power of ritual robes increase with use.

Following the above disciplines will make sure that the ritual robe is psychically associated with the said energy at all times, so that the mind can use it as a placeholder to abstract away its function, and focus on other aspects of the ritual.

It is our hope that this article has given you some of the most important considerations and rationale behind ritual robes, enough to also make an informed buying decision. In the long term, you can aim for a collection of different color robes with different inscriptions for different purposes.

If you are on a serious budget, it is recommended that you first get a robe with the color/inscription that most closely resonates with your patron deity, and to the system of magick you most subscribe to. Another option is to go for white, black and violet robes which should be sufficient for most magickal activities.

Glad you liked it Cedric! Please do go through the other articles on the website and let me know what you feel 🙂