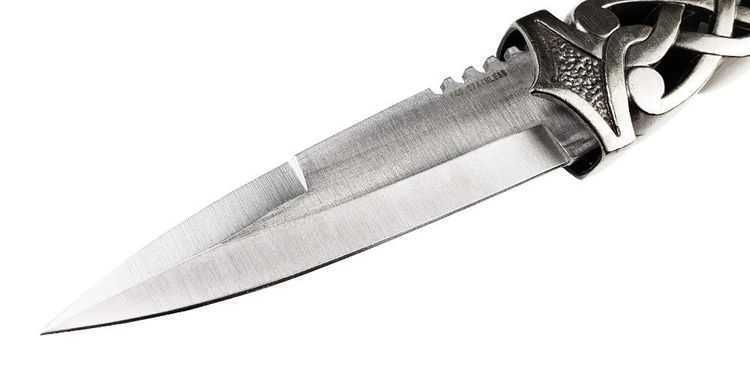 What is an Athame? How and why is it used? How to obtain and maintain an Athame? Since an Athame is one of the most important tools in magick, the answers to these questions shall be the subject of this article.

Witches and mages have several tools or “magical aids” under their repertoire — wands, chalices, cups, cencer, lamps, swords, mirrors, crystal balls etc. The idea behind having such a wide range of different tools is that each act as a different “psychological placeholder” to encapsulate different aspects of magick.

The wand for example, is the most general tool used to encapsulate the “will” in rituals. Once the psyche is programmed to associate certain actions done with the wand to more elaborate rituals, it effectively acts as a “shorthand”. This also works with evocations. A crystal ball on the other hand, is used to project divinatory contents of the psyche.

In a similar fashion, a ritual sword or dagger (Athame) is used to establish authority, dominance and protection in magick. This is often done by “charging” an association with the athame using the power of imagination under deep concentration. This will be covered in the subsequent sections.

In many traditional practices, an Athame would have a black handle and would be inscribed with various glyphs, elements, sigils etc. This is completely subjective, and what color the handle would be and what would be inscribed on it, should be based on your personal preference and for what purpose you would be using the particular Athame for.

The athame shouldn't be confused with “boline” which has a completely different purpose and is often used for alchemical work such as chopping herbs and preparing ritual ingredients.

Quick Navigation
Where is an Athame used?
Evocation of lower spirits
Protection from lower spirits, negative influences and magickal attacks
Casting a circle
Athame's use in blood magick and sacrifices
Where and how to get an Athame?
How to charge an Athame?
In Closing: Important considerations for taking care of an Athame

Where is an Athame used?

An Athame, has a similar function to that of the sword, trigent etc. It is a symbol of authority, dominance and protection in magick.

An Athame is often associated with the fire element and represents the masculine principle. In various symbolisms, myths and epics around the world, a heroic figure with a “flaming sword” is often described as the banisher of evil. From the myth of the Archangel Michael slaying the dragon to the more modern fictional works like Game of Thrones, the hero who redeems the world carries a flaming sword.

Indeed, this could be a jungian style archetype embedded deep in our psyche, from when the earliest hominids likely defended themselves from dangerous and overwhelmingly powerful wild animals using fire, often kindled on primitive weapons. However, the line of separation between the objective and the subjective is quite arbitrary and each effectively “contains” the other.

How this may have translated effects into the world of magick, and more, is covered and can be extrapolated from our article on idol worship which goes into alchemical thinking, and should be read by those who are interested in going down the rabbit hole.

With this in mind, it is possible to see how the “flaming sword” or an Athame, which is associated with the fire element in our psyche can have specific effects on reality via the deep psyche and magick, via synchronicity.

An Athame is used for the following purposes:

“Lower spirits” from one perspective, can be seen as the magickal and/or astral equivalent of the outwardly manifesting dangerous animal predators that the early hominids sought constant protection from (unless of course, mastery over communicating with them is achieved. Think of the “Lion man” for example).

Fire almost always scared the beasts away, and weapons were most likely kindled with fire.

No system of magick is complete without the knowledge of the evocation of lower spirits should the need arise.

There are plenty of ways to work with the lower forces such as demons, but the most commonly used method is to exercise dominance and authority over them and an Athame is often used for this purpose. An evocation of a Goetic demon is one such example.

One must remember such an act is to be done by the will of a higher authority and a higher deity or power is often invoked onto the human vessel.

The pitfalls of relying on the power of an uncultivated ego alone to assert domination over the lower spirits (however charged the athame maybe) are many.

This is of course, can become redundant if there is a communion with these forces directly but this also involves the invocation and will of a higher deity.

Sorcerers also use an Athame to unethically bind down human spirits to do their bidding, and often pay a hefty price in the end, but that is a subject for another day. Those interested in spirit work should read our article on summoning spirits.

Whilst doing certain types of ritual or spirit cleansing work, various spirits may try to intervene with your work either by physically ruining it or by psychically messing you up. This can often be avoided by wielding a well charged Athame throughout the process.

Negative influences and magickal attacks through sleep can also be redirected away using an Athame. This is done by tying one end of the handle of the athame onto a thread or a wire and the other end to the foot of your bed, so that the tip of the blade points to the ground, essentially redirecting the negative psychical effects away from you.

Used correctly, an Athame infused with ethereal fire can be a powerful tool of defence — one that drives away and burns almost every type of astral beast. The most effective way of course, would be to invoke the power of the deity whilst wielding the athame, rather than simply relying on the will of the uncultivated ego. Why this is effective is discussed in the article on idol worship.

Casting or drawing a circle for ritualistic purposes is often done with the help of a ritual blade and serves a similar purpose — to drive away potential negative influences away from the the ritual.

Since the athame is psychically associated with the fire element, it is akin to drawing a circle of fire, past which no dangerous creatures of the night shall pass. The circle is then purified with the other three basic elements also, with incense (air), salt-water (water) and earth (salt). A pentagram is then drawn at each quarter to invoke the elemental guardians.

The athame is also then used in combination with the chalice (by dipping it), which represents the water and feminine principle to symbolise the union between the male and female principles (the Shiva-Shakti), completing the symbolic invocation of the union between the subjective and the objective, dissolving duality into union. This sets the stage for the divine will to manifest itself for the subsequent magickal work.

Athame's use in blood magick and sacrifices

Where and how to get an Athame?

An Athame can be self-made or bought off any store. It doesn't really have to be anything fancy, but the closer it resonates with the purpose it serves to your psyche, the better. Some of our favorite picks are given below:

Often different Athames are used to serve different purposes — one for evocation, one for general protection and another for casting circles. Custom made Athames with sigils etc. inscribed on the handle and blade can be seen as a bonus, but it is not necessary.

The athame can be single or double edged — drawing sigils and inscriptions in the air is done with the pointed end.

How to charge an Athame?

When you first get yourself an Athame off the market, or even make it yourself, you need to “consecrate” or charge it. This is often done with a ritual, and different traditions have different ways of going about this. What is more important is the psychic association that one makes with the athame to make it an effective ritual tool, following the consecration.

Here is a way to charge an Athame after you get it, to infuse it with energy and to associate with your body as the vessel to wield it.

Preparation: Draw a pentagram on the floor with powdered charcoal or black powder and place the sigil/statue of your preferred deity such that it faces west (you will be facing east during the ritual). The candles are to be placed in front of this sigil/statue and the chalice in front of that, which will be filled with rose water. Preferred time for the ritual is after sunset on a Tuesday (day of Mars, which is the ruling planet for war, authority and power).

In Closing: Important considerations for taking care of an Athame

An Athame is a powerful ritual tool that can channel the "authority" energy of the psyche once it is associated with it, and it is my hope that this article has been informative in giving you all the tools necessary to tap into its power.

In closing, I'd like to mention a few considerations that you may want to take into account:

I love all friends

I personally use Athame on a weekly basis, and I think they’re one of the most important tools a witch needs.

“While purchasing an athame, pick what most resonates and stands out to you, do not think or haggle over the price. ”

This is the most important thing you could mention in this article!

This attraction between a witch and a certain athame is very hard to explain… You just feel it!

Great this page has unleashed my psychic powers Thanks a lot