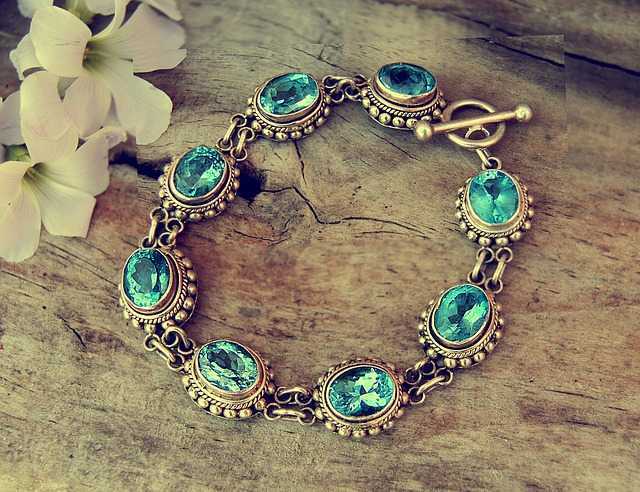 Pagan Jewelry: A Guide to Accessories of Magick

What is the significance of pagan jewelry? Is it just a means to decorate oneself and show off? How do you pick the right pagan jewelry for your psychic construct and potential? Where do you obtain good quality pagan jewelry?

This article will first go on to explain the significance of gems and metals, and how to pick the correct ones for you, given enough time for research (astrology).

However, there are also suggestions for the correct ones based on numerological significance, which will take significantly lesser time in later sections.

Humans (and even some of the species that preceded humans) have been adorning themselves with jewelry ever since the prehistoric ages. In the earlier ages when shamanistic practices were most prominent, they were made from stones, bones, shells, wood and the like.

As metalworking techniques were discovered (right around the era when paganism was the norm), various metals were also used as jewelry material.

However, they were not merely used as decoration, but as tools to ward off various forms of negative influences, and to boost various beneficial effects in one's life. But how might have this occurred to them in the first place?

Alchemy gives us a clue: For the alchemists (before the advent of modern rationalism and scientific method, and from which science evolved) who were involved in metallurgy and jewelry making, the world within the psyche, and the objective world were not distinct and separate.

Whatever occurs within the objective is a reflection of the psyche and vice versa. This becomes very apparent to you if you have experience with psychedelics, meditation and various other forms of controlled altered states of consciousness.

Indeed, even through objective analysis, we come to the conclusion that the reality that we see, experience and study, even through tools such as science and math that enable us to go beyond our direct sense perception and fallacies is fundamentally limited (and also produced) by our neurological mechanism (math and science emanates from our neurological mechanism, it is not intrinsic to the universe itself).

This has been discussed in a more comprehensive manner in the article on idol worship.

I am going to reiterate some parts from it, since it is highly relevant here:

A very good, relatively modern example of this is the discovery of the benzene ring by the chemist August Kekulé: “He said that he had discovered the ring shape of the benzene molecule after having a reverie or day-dream of a snake seizing its own tail” (this is an ancient symbol known as the ouroboros).

Even modern science and popular opinion seems to be heading the way back to the notion of panpsychism — That the fundamental unit of the universe, and everything within it, is made of “consciousness” rather than matter itself, or that everything contains consciousness, just to varying degrees.

If that is so, then the stones, crystals and metals that you use as jewelry is made of the same consciousness and universal psyche as you and I.

The only difference is that you have the illusion of control over this body that you think you own.

But conversely, you can also say that “YOU” DO EVERYTHING and that you are simply not aware of all that “you” do.

Pagan Jewelry selection based on temperament

The “consciousness field” can be said to take the form of the container from our point of view. The various pagan jewelry (metals, crystals, stones etc.) then, can be said to have various psychic effects depending on what it is, when “it's” conscious field intervenes with that of “yours”.

In the article on colors and its influence on magick, we discussed the various effects different colors have on our psyche, and how it is a well known fact in academic psychology. The same be easily said for the pagan jewelry you own/want to own.

Depending on your temperament then, you may want to increase or decrease certain characteristics in your psyche to have a balanced mental health, direct the course of your life to a more optimal direction and boost the effectiveness of your magick. This is why, it is paramount to understand what type of pagan jewelry is appropriate for you, and we shall see next, on how to figure this out:

Temporal elements, “quality” of time and the course of your life

All matter in space is composed of fundamental elements. What element it is, is dependent on the composition and position of subatomic particles (electrons, protons etc.).

But, as our observations have lead us, space and time are the same thing and are interchangeable. Therefore, even “time” can be said to be composed of elements.

The 64 different hexagram in the I-ching for example, can be seen as 64 “elements” of time. Similarly, in the macro cosmic scale, the specific arrangement of planet in astrology at any given time, can be seen as the “element” of that given time.

Although not as solidly observable as the material elements, with enough calculations and tool-sets, it is possible to arrive at an approximation of the time element to a satisfactory level of accuracy.

The arrangement of the planets at the birth then, can be said to be a sort of “blueprint” for the type of of psyche field one may possess, which will direct the course of their life.

When comparing this blueprint with the temporal element (arrangements of planets in this context) of any given time then, one can determine the course of one's life and the direction it is headed at that point.

“Pagan Jewelry” like specific metals and crystals are to be most optimally used as remedies for the potential bad effects and to boost the good effects of the planets in one's birth chart.

Therefore, it is recommended that one either have some proficiency in the mantic arts, or consult someone genuinely skilled who can prescribe the correct jewelry. This is very hard these days.

Otherwise, it is highly recommended to stick to types of pagan jewelry that is generally very beneficial for everyone. Some suggestions are given:

The pentagram and pentacle as a talisman for shielding, power over the elements and drawing down of ethereal powers.

Navaratna ring or necklace or bracelet containing nine gems corresponding to all planetary influences. It has to be worn on the Sun finger (ring finger). Examples:

Navaratna mantra for charging the stones corresponding to the nine planets (or grahas):

Goddess of the night pendant

Remember that every jewelry that you wear will have a cumulative psychic effect on you, and it is simply not worth it to adorn the wrong type of jewelry — This is especially true for primary stones, crystals and metals. A diamond may last forever, but if prescribed incorrectly and poorly taken care of (cleansing and energizing), the malefic effects are simply not worth the social boost.

However, if you still want to benefit from specific types of crystals, stones and metals without the use of astrology, another option is to choose crystals and metals based on numerology.

The date that you were born on can also be seen as a “time element” map for the blueprint of your psyche. The level of accuracy may not be as precise as astrological calculations, but it is possible to figure out the correct type of “birth” stone and metal, based on the ruling planet of the number.

Suggestions for the correct type of “pagan jewelry” based on numerology are given below: Crystals and stones can be worn as pendants. Otherwise, it has to be worn as a ring on the appropriate finger, mounted on the correct type of metal. Primary stones are preferred, but secondary stones should work just as well. Higher the carat, the better of course.

They are often much more powerful than metals alone, but they are not as flexible — you cannot inscribe sigils, yantras and words of power on them. Metals alone often have lesser effects on the psyche than crystals or stones, but they can be used to inscribe a sigil, yantra etc based on your requirements. They also act as placeholders for the stone/crystal, especially if you are planning on adoring a ring

The following are the stones, crystals and the appropriate metal recommended according to numerology. Pick the right one based on the date you were born, and adorn it on the correct finger appropriate to the ruling planet. You can of course choose earrings,pendant or bracelet instead, and also stack ring, earrings, pendant AND bracelet:

Important considerations for wearing and taking care of the pagan jewelry

To summarize, this is how you pick the right pagan jewelry for you: